Earlier this month (July 3), I wrote about Doc and I hauling dirt for our 39th Anniversary. As of today, that Anniversary Garden is completed.  We cleared the unkept area, put in some river pebbles, laid weed cloth, spread a few hundred pounds of white marble chips, added a red gazing ball, and created two interlocking hearts filled with red glass pieces. 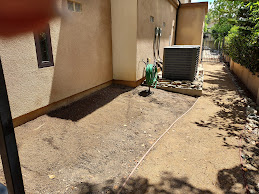 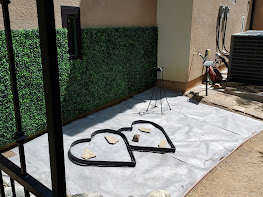 The Anniversary Project was completed over several weeks, with a few memorable moments and statements.

“Our Two Hearts are Linked Together.  (Or at least welded together).

Tina:  “I want ROCKS for our Anniversary.  No, NOT diamonds or gemstones – I mean Rocks!” 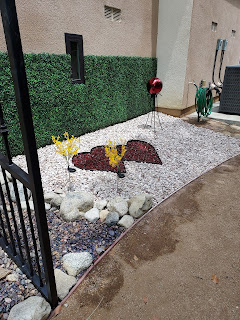 The river of rocks says “Keep on flowing; ever changing”.

The weed cloth says “Prevent unwanted things from growing in our garden (marriage)”.

The solar flowers say “You light up my life.”

This Garden pretty much shouts, “I LOVE YOU!”

I challenge YOU today to give a Shout Out “I LOVE YOU!” to someone who may not be expecting it from you. Make their day!

Currently the Penny Palace front yard and Grand Room are decorated with Sunflowers and ladybugs.  The décor looks so cheerful and brings Joy to people passing by. 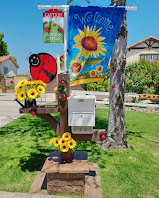 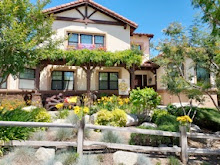 Tonight a local artist center was holding a 2 hour workshop on painting sunflowers!!!  That caught my eye.  I had never tried canvas painting and was nervous, yet curious to try it.  Yesterday I was lamenting to Doc.  “I sure wish I had a “buddy” whom I could call to do things like this with me.  His reply “Aren’t I your best buddy?”   “Yes, but I didn’t think you would want to do something like this.”  His reply “Not really, but I will because we do almost everything together!”

It’s pretty intimidating to start with a blank canvas. 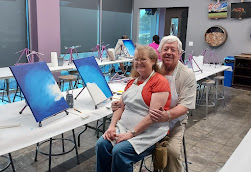 Shortly after painting the blue background we realized it might be more fun if I painted a mirror image of what Doc was painting.  It would be interesting to see how well matched or different the two pieces would be.  Like handwriting, each person has unique brush strokes.

Here are our finished pieces.  What do you think?  Which is Doc’s?  Which is mine?

This was the painting created by the instructor and used to advertise the workshop.

Last week I read an article about Sunflowers.  The sunflowers have a message: they always look to the light.  As the flowers grow, the face of the flowers constantly turn to the sun in the east and follow the sun throughout the day as it moves to the west.  During the night they again turn to the east anticipating the dawn of a new day.

We can be like the sunflower – always anticipating the light of tomorrow.

Today is our 39th Wedding Anniversary, so we are beginning to "pretty up" an unattractive and unkept area of the yard where the air conditioners and some debris reside.

Doc says we should go out for dinner or do something special - I say we are doing something special!  We are creating a beautiful area which will last a lot longer than a meal which will shortly turn into  SH__.  Now I am emailing to our friends in order to SHARE our Anniversary evening and JOY with them.

Can't get any better than that!

QUIZ:  If given a choice for an 'Anniversary Date', which would YOU choose?  Spending $50-$60 on some fancy dinner or spending $30 on a load of dirt?  We chose DIRT! 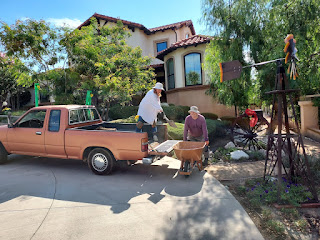