For over a year Doc and I have been investigating and getting quotes for various window coverings in the Grand Room.  The sunshine is incredibly intense in that room and almost blinding at times while working at the dining table.

We finally compromised and settled on interior roller shades.  Today Daniel came to do the installation.  He thought it would be a typical 30-minute install for two shades.  Nothing at the Penny Palace is typical!  Just getting the 24 ft. extension ladder into position took a bit of time.  The job took three times as long as Daniel expected, but he smiled and was “an Angel” throughout the process.

The motorized shades did not have the brackets as typical shades do.   Good thing Doc was home.  He cut pieces of lumber and drilled holes in those to work as support members.  (He is an Angel too).   All we needed were EIGHT 4” screws.  No problem.  We went to look at our supply in the garage.  Rats!  Last weekend we left our boxes of screws at the cabin where we were screwing around on the decks.  We managed to find only TWO wayward screws.

I was planning to drive to the hardware store for more screws, but that would take at least 30 minutes.  I was nudged to call Neighbor Craig.  I asked if he had TEN 4” screws.  (I figured a few extra just in case we needed them).  Craig said he would check in his garage and call me right back.  A few minutes later the doorbell rang.  It was “Angel” Craig with his outstretched hands saying, “These are the only SIX 4” screws I could find.”    His SIX, plus our TWO made for EXACTLY the Eight we needed!


Be Thankful for Angels on Earth.  J
Posted by PennyFinders at 8:44 PM 1 comment:

Have you ever met someone while on travel and said to them, “If you are ever in our area, look us up?”  Doc and I have said that to a few people over the years. Rarely has anyone taken us up on it.

Five years ago after Doc retired from teaching, we took a celebration trip to Copper Canyon in Chihuahua, Mexico.  We spent two nights at Hotel Paraiso del Oso  where Doug “Diego” is the owner.  We somehow clicked with this man.  Perhaps it his work with the education of local young girls, his efforts to get school supplies for remote students, or maybe his desire to bring running water and solar power to schools in the region.  He is quite involved in improving conditions in his surrounding area.

When we were staying at the del Oso, Doc was tired and went to bed, but I went back to the Main Room where I found Diego.  We spoke of many things, but I clearly remember what he shared about his wife, Ana.  “Ana’s dream is to someday visit Disneyland.  Perhaps I can make that happen for our 20th Anniversary”.  I told him that if they made it to L.A. to please contact us to say hello.

Sunday (two nights ago), I was looking at Facebook. (That is something I rarely do).  Doug had posted that he and his wife, Ana had just arrived in Anaheim. They were celebrating their 20th Anniversary – one year late.  They would spend the night, visit Disneyland on Monday, then immediately head to San Diego.

What a COINcidence that I would see that posting!  I immediately emailed to Diego and scolded him for not contacting us!  On Monday morning at 9:09 a.m. he wrote back: “If you are willing to put up two Mexicans who can use either a bed or floor space, we can change our plans and head your way.  I'll try to check email when we leave Disney this evening.”

For the next 12 hours I scrambled to prepare the house for guests.  I recall mumbling something to the effect of, “Dear God / Angels:  If YOU plan to use the Penny Palace for Special Reasons, would you be so kind as to make reservations a few days in advance so that I can clear my calendar and be better prepared?  This frantic scrambling is tough!"

I cleaned, went to the store for some food, and even got some flowers.  By 10:15 p.m. we still had not heard from Diego and I wondered if they would visit or not?

Doug and Ana finally arrived around 11:30 p.m.  Through conversation, I found out that the tourist business has been slow for them (essentially no bookings this month), so they had packed sleeping bags, rucksacks, food in an ice chest and headed to California! 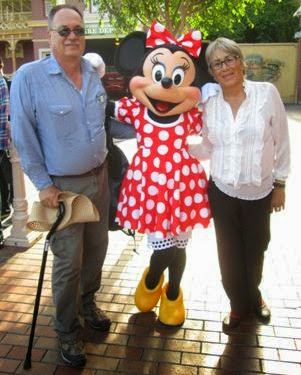 Ana does not speak any English, so as Doc, Doug and I were chatting, she was quietly viewing her Disney photos and smiling.  She was thrilled to have her Disney dream fulfilled. 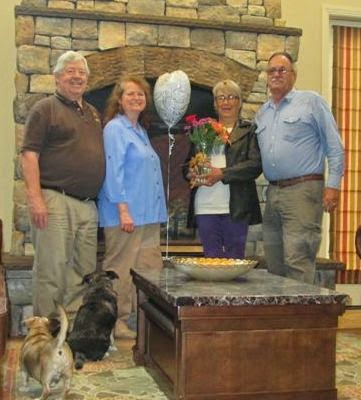 This morning we had breakfast, then a tour of the Penny Palace.  Such a fun time.  Ana liked her anniversary flowers.  Doug said that Ana had never before had such an elaborate bouquet.  I was amazed because when I bought them yesterday, I had wrestled with the purchase.  “Do I get the little $7 batch, or splurge and get the $11 batch?”  I got the little one.  For Ana, that WAS a big deal.  All things are relative!

Lesson:  Be open to unplanned adventures.  They can bring such JOY!