It is two weeks from Norman’s passing and I sure miss the little monster!

This morning I went to the pet store to get dog food for Dundee and to remove Norman’s name from the mailing list.  (No more birthday cards and coupons please).

As I went through the checkout lane, I was feeling pretty somber (dismal).  I looked down and there was a penny.  YAY!  OK. That was not too surprising. 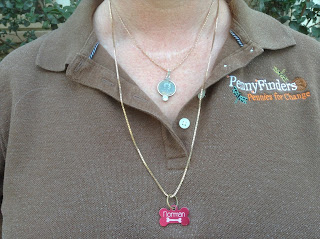 There was a customer waiting to speak with the cashier.  She noticed my necklace  (Norman’s dog tag) and commented on it.  I was not in a mood to chat and merely said “thanks” as I began walking away.  Then came that dreaded “nudging”.  I stepped back and asked the customer, the cashier and the man behind me if they would like to hear a neat story?  I briefly shared with them how Norman came home for just a few minutes in order to depart from the dream house which he helped build.  Then I told of Norman’s JOY when the Angels and Sparky came to help him cross over.  It was merely a few moments of sharing between strangers, but they truly seemed to appreciate hearing Norman’s story.

By the time I got to my pickup truck I was bawling.  Rivers of tears were flowing.  I unlocked my door, but just stood there unable to do anything but cry and blow my nose.  I looked down and there was a bright shiny penny next to my foot!  Remember that single shiny penny found the day that Norman crossed?

Was that second penny merely a COINcidence?  Or a hello from Norman to comfort me at that precise moment when I needed it?
Posted by PennyFinders at 6:52 AM No comments:

Here is a little more to yesterday's story of Norman's Way.  It had me in tears.

My friend Mandy just read the Tale.  She and her new husband were away for a nice weekend getaway.

Mandy has a gift and has helped numerous souls (usually human ones) "cross over".
For all of you who have ever loved a pet, her email will warm your heart.

I loved this story and thanks so much for sharing!

Yesterday after you let me know Norman had gone, I cried a little and Kyle and I went on to check in at the hotel. We gathered our stuff to go sit out on the beach and relax. As I laid there, I quietly meditated to see if I could sense Norman yet.

As I tuned in, I saw Norman come forward and I watched and could tell that he was already understanding where he was and then he kinda looked to the side and just behind him I saw Sparky. They both wagged their tails at the same time!!! And I smiled because I could see that they were together! 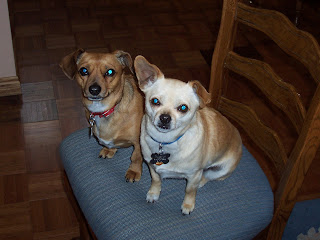 I almost emailed you last night but wanted to be careful about sharing this... After reading your story and hearing how he wagged his tail, I just knew! Wow!!!

Be looking for signs from them! Norman was so smart, he's probably coming up with fun ways to connect!

Posted by PennyFinders at 3:00 PM No comments:

Background:  From the moment I saw Norman’s eyes on the Rescue site 12 years ago, I KNEW he and I were meant to be together. (I had a similar feeling when I met Mike, ‘Doc’, 34 years ago).

When Doc and I went to the shelter to meet this Dachsy / Chihuhua mix, the staff was hesitant to adopt him out because of his attitude and previous negative experiences at the hands of humans.

Norman was intelligent, demanding, curious, handsome, stubborn, a devil, an angel, charming, caring, and dozens of other superlatives.  He insisted that things were done HIS WAY!  Today Norman did things HIS WAY …. 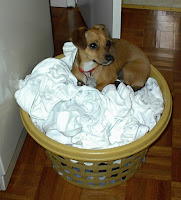 Most of you reading either Penny Tales or Tales from the Penny Palace  have met Stormin’ Norman or at least read about him.

Do you remember the Tale in December 2013 when his eyeball was pulled out, but then had a miraculous healing and totally re-gained his eyesight?

Norman was a canine with attitude!  He knew he was more intelligent than any human.  He allowed us to live with him these past 12 years and filled our lives with such JOY and challenges.  (Like when he snuggled into the basket of clean warm laundry).

This afternoon at approximately 1:10 p.m. Norman went to Heaven.

For the past five days Norman’s Cousins (our nieces and nephews) have been staying here at the Penny Palace for the annual “Kidz Kamp”.  Norman was able to wag his tail and smile at them.  He sure enjoyed watching all the activities of the Kamp and being part of the happiness.

It had been quite a struggle for Norman these past two months as his heart slowly shut down and his lungs and abdomen filled with fluids.  Last week he had refused to take his medicines or eat on his own.

Today around 11 a.m. we took Norman to the vet because he had not pooped these past five days and his abdomen was swelling.  The vet prescribed more medications.   A re-check appointment was scheduled for Monday.

As we drove home with Norman in my arms, I “centsed” something had changed.  His gaze was getting further away.  I just held and stroked him.

When we got home, Doc carried Norman on his pillow and laid him down in the plush shaded grassy area near the mailbox out front.  Doc went in the house for a few minutes.  Norman was laying peacefully on the grass and I was beside him thanking him for so many wonderful memories.

Suddenly Norman’s looked up.  His eyes were alert and his tail began wagging with a Super Happy Enthusiasm!  I was not expecting that.  My heart was filled with Joy at that moment.   He smiled as I stroked him.  I asked him if he was seeing Angels?

He looked so happy!

I asked Norman if maybe he was seeing his brother Sparky? (*)

Note (*)  Sparky and Norman were adopted from the rescue shelter together in 2003.  Sparky was the “Angel” which helped counter balance Norman, the “Devil”.  Sparky passed away 17 months ago.

Norman’s tail wagged with such a happy intensity I could not believe what I was seeing!   I was actually laughing and asking Norman what was making him so happy?!?!?  I shouted for Doc to come out and share that moment.  Doc came out and laid down in the grass with Norman and me.   We stroked and spoke softly to Norman.  We thanked him over and over for his years of companionship.  We caressed him as he took his final breaths. We thanked him for choosing to come home today to spend his last moments at the Penny Palace.  (**)

Note (**)  Norman spent 11-12 years of his life helping to design, build, inspect, then “test” our dream house.  How appropriate that he should choose to depart from here. 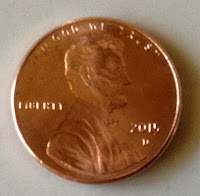 After returning to the vet clinic to finalize things, Doc and I went Penny Finding.  We could NOT let the coin Finding Streak end today.  Norman would not like that.  Tears were streaming down our cheeks as we searched for a coin.

I asked the Penny Angels to provide an appropriate coin to honor Norman.  They provided just one coin today.  The coin was a penny.  (Which in this case was more appropriate than any silver coin).  The penny was very shiny and minted with 2015 D.  Doc says the D is for “Dog” and the 2015 of course is the year of Norman’s passing.  To me, the shiny new penny represents the shiny new body which Norman now has in heaven.

In reflecting over these past few weeks, we are so very grateful to Norman for his timing of when to leave.  He did not leave while we were out of state on travel last month.  He did not depart while the Kidz were here this week and he seemed to have had a really great time with them at Kamp.

Doc looks at numbers.  He is looking at the solar insolation graph generated today and saying, “There was cloud cover all morning with readings of less than 2 KW.  At the time of Norman’s crossing, the sun came out and solar readings more than doubled!”  I guess heaven must have been opening its doors to welcome Norman.  J

Norman chose today where we had zero appointments scheduled, essentially no emails coming in, and Doc and I were both present.  We could devote the entire morning and afternoon to Norman, then spend the evening grieving.  There are no commitments tomorrow (so we can stay home and deal with the pain).    Norman was incredibly intuitive.

Here are a few additional photos just for fun.