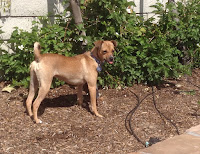 It’s mee, Liesel.  It has bin tree munths sins I last wrot to U.  My adoptive sister Sheila and I have pretty much taken control of dee Pennee Palas.  We are now in charge and keep Mr. Doc and Ms. Tina bizee wid takin’ gud care of us.

Aren’t I gud lookin’?  I was a scrawnee young whippersnapper when I furst got here.  Now I am a lean mean racing machine.  Wee bin eatin reel gud, dashing thru dee house and yards, and getting lots of training treats.

Look!  Wee even have our own day bed.  Dat is cauz wee like to work on our tans in dee dog yard, but dee concrete was too hard for us and dee artificial turf was too dirty.  So Ms. Tina got us dis bed for lounging.  Plus, we can keep our eyes on dee neighborhood and street to make shur our hous is safe.

Today was dee Final Test for dee six week training class Sheila and mee have been going to.  Sheila does everyting Mr. Doc tells her to do.  She walks, she sits, she lays, she stays, she comes.  She is such a show off and of course, “Daddy’s Little Girl”.

Der were four canines and der peoples in our training class. Sheila was dee first one to take her exam tonight, so Mr. Doc says “Sheila Finished First in her class”.

I was dee last one to take dee exam.  Ms. Tina and I have been training for six weeks now.  It’s so funee when Ms. Tina makes all sorts of faces and noises to try to git me to understand her.  Of course I know exactly what she wants me to do.  I’m not stupid!  But I got other tings on my mind.  Der are leaves to attack, bugs to chase, smells to investigate.  Why ever would I want to jest sit still or lay down?

I tink dee teacher Miss Barbie liked ME dee best in the class!  She told dee other three dogs dat dey could move on to a new teacher.  She must not like them so much.  She wants ME to come back next month and bee wid her for another six weeks.

For the past two months Doc and I have been working on a “Passion Project”.  It is essentially a community beautification project called the “Garden of Hope”.

One of the features of the Garden is a dry stream bed.  Doc and I managed to collect and transport seven loads of rocks from various sources for that.  Those were rocks which we could lift into Pippy (my 24-year-old little truck).

In addition to the stream, I planned for 6-8 Feature Rocks in other areas of the yard.  I had several leads on those and didn’t realize how difficult the task would be to actually obtain them.  One by one this past week, it seemed the doors were shutting down on each of those leads.

Wednesday:  I visited a construction site where two guys said they would help me lift the desired rocks into my truck on Thursday at quitting time.

Thursday: I returned with gloves, wheelbarrow, and a case of beer for the guys.  The same guys were not working.  I stood in the sun for 40 minutes as the carpenters wrapped up their work for the day.  Then I asked several of them if they would help me lift a few rocks.  None of them would except for one “old guy” (probably in his sixties) who said OK.  He lifted one rock and was going to quit, but I pushed for a second.  After the second one, the poor man said “No more” in very broken English.

One by one the workers left.  I was standing next to a rock with my ready wheelbarrow in hopes that someone would just take 2 minutes and help.  The last guy was walking over to me …..
and right past me into the blue Port-a-Potty!  When he emerged I asked if he could lift the rock into the wheelbarrow with me?  He replied, “but then what would you do with it?”  He then locked the gate, got in his truck, and drove away.

I was so discouraged.  I sat on the side of the road too weary to lift the wheelbarrow back into my nearly empty truck and so disheartened.  Tears were streaming as I said, “Look Powers that BE – I have been doing everything I can think of now for several weeks to get these big rocks for the Project. I want to give up on this!  I quit!   If YOU want the D*** rocks, then YOU get them!”

Within two minutes a big grey truck came down the street.  The driver pulled over to my side of the road and said, “Do you need something?”   After the initial shock, I replied “Yes – Rocks.”  He asked from where I needed to fetch them?  I told him my story and that it appeared my resources had dried up.  He said he would somehow help me get the desired 200 pound boulders!  I told him he was an Angel!!!  He laughed.


Two hours later I received an email and this photo saying “Rocks are in the truck. Where and when would you like them delivered?”

Friday:
Lou and a co-worker James met me at the jobsite.  These “Rock Angels” had the stones Rolled off the truck and carried aside within a few minutes.  Again my tears were streaming.  This time in gratitude!

Saturday:
Miguel was the first worker to arrive on site, I was so very excited to show him the rocks.  I explained how two of the rocks would go here… and another two were to go here … and another one here ….  (And those locations were also shown on the design plan).

Then I went to fetch a load of pea gravel for the stream.  When I returned the rocks had been moved – but NOT where I had intended.  They had been used as part of the stream!!!  NO!!  I was very “frustrated”.  (A polite form of the adjective).

I could not move the rocks by myself, and I could not ask Miguel to take them back out.  I was at wit’s end.  In addition, Miguel said he needed an 8th load of medium stones for the stream!  Grrrr…  Doc and I headed out for rocks to a site near our home and said we would return in 2-3 hours with a load of washed rocks.

Doc and I usually take a certain route, but Doc asked if perhaps today we should take an alternate route.  We drove past an excavation site which I had been watching for a few weeks.  Today (a Saturday) there were four pieces of heavy equipment operating!  And rocks of every size all over the place!  Doc and I were able to fill my truck in just a few minutes and these rocks did not need any washing.  I expected Load #8 to take us three hours to obtain.  We were done in 30 minutes!  This was almost too good to BELIEVE!

A guy in a pickup truck stopped to see Doc and I as we were loading rocks. Uhh Ohh… Angels please help out here.  The guy was super friendly and said we could have as many rocks as we wanted and the gates would be open until 5 p.m.!

I asked the guy about getting some “feature boulders” (big ones). He said to take what I wanted.  Now how the heck could I lift 200-250 lb. rocks?  I drove back to the Garden Project and managed to get Miguel, Angel and Doc to come with me to the excavation site.  I still did not know exactly how we would lift the heavy boulders into Pippy.

Can you believe this?  There was a berm with dozens of boulders the size we needed!  I backed up my truck, then Miguel and Angel essentially ROLLED the boulders right into Pippy’s bed!  Talk about a miracle.  We did not have to lift the boulders!

Poor Pippy.  She is such a trooper.  She was scratched and tired, but she graciously hauled the heavy load back to the jobsite.  It was 100 degree at the time, but she kept her cool.


The Angels arranged for incredible boulders from not just ONE source, but from TWO!  It was if they were saying, “You think the first ‘miracle’ was mind boggling?  Here’s Another One.  NOW do you BELIEVE?  Just ‘ask and ye shall receive!’”
Posted by PennyFinders at 11:08 PM No comments: