Recently Doc and I invited some friends over to the house before an appointment they had in the local area.  Knowing my culinary skills, Doc suggested we all go out to lunch (actually the couple suggested it as well).  Since they had over an hour’s drive to get here, I thought it would be nicer to have lunch here at the Penny Palace.

It was approximately 1 a.m. the night before the luncheon and I was preparing the food.  Of course Doc was already in bed.  I thought some energizing music might be nice.  I found a Lawrence Welk Playlist on Paul’s Video Jukebox.  Some wonderful old music there – and it’s FREE!  Happy Music.  Lots and lots of “oldies”.

The Lawrence Welk Show was one of my (recently departed) Father’s favorites.  Every week the family would watch that show.  As the music was playing, I began talking to Father out loud.  “Hello Father.  Are you more comfortable on the other side?  Are you studying and learning more?  Hey – neither one of us is/was great in the kitchen.  How about if you help me out here?”  and then I said: “You and I are both Engineers.  IF you are here, it would help if you provided some sort of PROOF.”

Some time between 2 and 3 a.m. I was working across the kitchen at the Breakfast table.  I heard a noise which startled me.  It was the garbage disposer going ON!  I have had devices fail and go OFF, but to fail and go ON?  It was something from a horror movie!  I was looking for Gremlins to be racing on the counters and sitting in the blender!  Of course I ran to the sink area and played with the control switch.  That did nothing.  I dove under the sink and disconnected the unit.

Doc hates plumbing work and we had plans for the morning.  Thus I dreaded telling him that we had a little something we needed to deal with...  After Doc had some coffee in him, I told him the story.  I expected him to grumble (he does not swear) and be quite irritated by the change of plans.  He laughed!
I’m thinking: “Huh”?
Doc’s response:  “Don’t you get it?”
Tina: “Get what?”
Doc:  “Remember the video tribute your brother created for your Father’s memorial service?”
Tina “Yes”
Doc: “You were a bit dismayed because there were numerous great shots of your Father with your brothers in the hot tub, motorcycle riding, doing things together, hugging, etc.  Yet there was only one shot of you and your Father together.  People even joked about the “Father / Daughter bonding time”.

Tina (laughing):  “Right!  That one shot was of my Father and I with our butts in the air replacing a kitchen garbage disposer!”  (See attached). 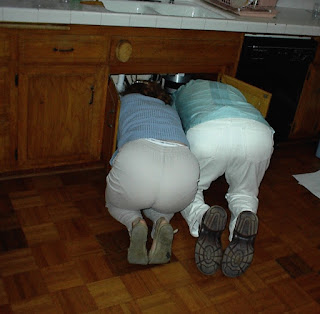 Posted by PennyFinders at 5:59 PM No comments: