People frequently ask, “How in the world do you find all those coins and have such COINcidences?”  My reply: ASK!  Call it answer to prayer, manifesting, law of attraction, or whatever -- it works!

You may be saying, “Sure Tina it works for YOU, but I doubt it will work for ME”.  Read on.

***********
Example:  A few days ago I was paying at the self-checkout line at Target.  The bill was $18.01.  I thought how nice it would be to have a penny to make payment easier. Then I laughed and talked to the Angels….”Hi Angels.  You could choose to deliver a penny right now, but that would put me in a quandary. I save all the Pennies I find.  So if I were to find one right now, would I save it or see it as an answer to paying this machine?”  Sure enough, I looked up and on a shelf to the right of the scanner was a bright penny!!!  I’m tempted to leave you hanging there, but I realize a bunch of you will write back to ask what I did…  I inserted the penny into the machine, then at home I put a regular penny into the Found Penny Collection.

***********
Example:  A neighbor says she NEVER finds pennies.  I wrote back saying “When is the last time you sincerely ASKED for one?”  She read my reply and within hours wrote back to say she had asked and one had been given to her at the car wash.  She was excited.

The neighbor also mentioned that she and her late husband had discussed dimes as a way of communicating once he had crossed over.  The morning after she read my email, she found a dime at the bottom of her closet.  COINcidence?

***********
Today’s story:  For several months I have had these two gardening clippers sitting in the laundry room on my clothes dryer with the intent of getting them sharpened. Definitely not a high priority with the Holidays, Doc’s surgery, etc.  For weeks it has bugged me to see them laying there, yet I was not motivated to research and find a sharpening service.  This morning I said, “Angels / Universe can you take over this project ‘cause I am just not going to get to it.” 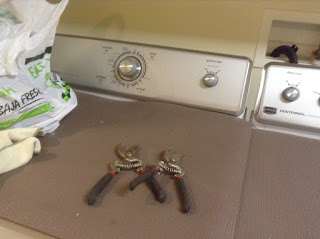 This afternoon I took a quick trip to the post office, then the grocery store for bananas for Doc.  As I emerged from the store, there was a guy sharpening knives in the parking lot!  No kidding!  Mark’s Mobile Knife and Scissors.  I approached the guy and asked him where he might be working in the next few days and did he sharpen yard tools?  He said when he finished the order he was working on, he would come to my house.  I told him that would be silly for two little tools.  He insisted that it was not a problem.

Sure enough, an hour later Mark was at my house.  We chatted on dozens of topics and had a wonderful time together. I added a few kitchen knives to make it worth his drive.  I gave him a $10 tip and asked that he either invest it wisely, or “pay it forward”. He laughed and said that earlier today he had given $10 to a co-worker and KNEW it would come back to him.  He just didn’t expect it so soon! 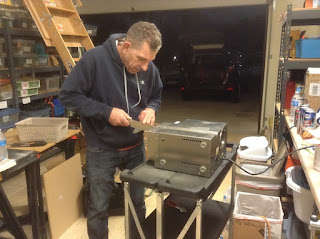 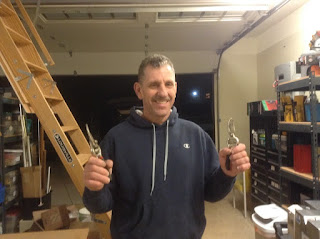 I have never seen a mobile sharpening service in this area.  What are the chances that one would appear within hours of my “handing over” the task to higher powers?   It truly was a Holy Encounter on so many levels.

***********
Lesson:  You can sharpen YOUR manifesting muscles by Exercising Them!