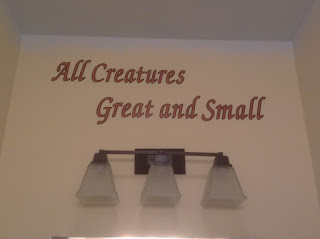 The Penny Palace was built to welcome friends, travelers, and creatures.  Many of you have seen the Wall Lettering “All Creatures Great and Small” in our garden (main) bathroom.  However, some creatures are just not quite as welcome inside as others.  We prefer four-legged furry guests over zero-legged scaly guests.

This afternoon I was on the computer in my office trying to teach my mother how to use emails.  Doc exclaimed from the kitchen area, “Tina!  I need you to come here!”  My heart jumped into my throat thinking that something had happened to Dundee.  Please not another urgent canine situation …

Doc’s face was almost ashen.  He did not look injured and Dundee looked fine.  What could it be?  Doc sputtered, “There is a SNAKE in the (attached) garage”!  Most of you know Doc, so you can visualize this situation …  Doc hates spiders and crawly things and does not want to deal with those.  Snakes bring him to a level of TERROR!

I went to the garage to analyze the situation.  We opened the garage door in hopes the snake would make a “run” for it.  Doc had seen the snake under the outdoor vac.  I moved that - no snake there.  I assumed the snake had slithered under the shelving units.  I proceeded methodically to pull things away from the wall and created vibrations to urge the critter to emerge.

The snake briefly showed itself before moving forward and under my Craftsman tool cabinet.   Under the cabinet there were some metal support pieces which I began pulling out.  The snake hid in one of those long pieces.  OK.  At least now we knew where it was.  The metal piece was pointed back toward the cabinet versus toward the open garage door, so I needed to pivot that metal.  I was using a piece of rebar to block the snake at one end of the tube in hopes it would head out the other side.

I’m sure what I said to my mother was something similar to “Dearest Mother, would you kindly move aside that bright orange electrical extension cord such that I can maneuver this metal piece and allow Mr. Snake to escape from this room.”  Mother did not move.  Again I requested, “Could you kindly lift that cord out of the way and put it on the shelf?”  Again she did not respond.  “MOVE THAT CORD NOW!”  She did.

There was just one other metal bar in the way.  “Mom, move the bar for me”.  She began asking WHY and shouldn’t we be doing this and that and???   “Mom, would you just follow my instructions!” Doc came over with a shovel and a broom to see if those could be used as blockades.

CRUD.  The snake had turned around and was trying to come out of the tube in my direction!  I had Doc hand the broom to Mom (later she could use it for her transport home) while I used the shovel to blockade.   I had Doc quickly fetch my leather gloves from across the room then handed him the shovel while I dove for the snake.  Two or three times I thought I had a grip, but the snake wiggled its way through my hands and tried to “grab” the leg of the tool chest.  I spoke kindly to it (to soothe it as well as MY nerves) and said I was merely trying to help it.

Finally I got a good grip fairly close to the snake’s head.  The little guy was quite pretty, maybe 3/4” in diameter and 30” long.  I carried him out to the front yard – which was NOT far enough away according to Doc.  I should have transported it to the open field across the street.  Hindsight.

I sure wish this incident would have been video taped.  You would likely be rolling with laughter to have seen this comedy act!

Today was an especially challenging day for Doc.  He had to endure numerous things which he strives to avoid:  Being in a court room, Snakes, Lawyers, Spiders, Long Drives, Painful Knees, Plumbing Repairs, plus a few unmentionables.


THOUGHT:  Every day each of us are faced with “Snakes” (Fears and Challenges) we must deal with.  How will YOU handle YOURS?
Posted by PennyFinders at 11:55 PM 1 comment: