Have you ever wondered what you would do or what you would pack if you had only ONE Hour to evacuate your home?  Today we had to answer that question.  It was an eye-opening experience.

This evening as I am typing to you, I am watching thick, dark smoke billowing from less than a half mile away ….

We watched the TV coverage of the Etiwanda Fire as it grew … Doc said, “If we had to evacuate with the dogs, where would we go?”  Within 60 seconds our phone rang.  It was some dear friends of ours, the Zells, who live 3-4 miles away offering for us to bring the dogs and take shelter at their house.  Talk about manifesting!


Doc was not sure if he should go to school and teach today or not.  I encouraged him to go saying that fire was several miles away. But just in case I did need to evacuate, what would be important to him?  We quickly walked through each room noting key items.  We had some good laughs when both of us said we would pack Solar Car team Posters, the Australian boomerang award, and other solar car stuff!  LOL

***********
Doc left for school just before Noon.  At noon, a Sheriff drove down the street with a bullhorn saying there was a Mandatory Evacuation!  I began packing and loading my pickup truck, Pippy.  Dogs, documents, computer, overnight bags, and the precious solar car posters and awards!  :-)
Within one hour I was ready to depart.  Just before leaving, I stood in the Grand Room and asked the Angels to watch over the Penny Palace.  Very much as I did back on December 1, 2011, Day #1077 of Penny Tales.

After dropping off the load of things at the Zells, I returned to the neighborhood to see if anyone else needed assistance.  Most of the neighbors said they were staying until forced to leave.

***********
The mandatory evacuation was lifted at 5:30 p.m., so I retrieved the dogs and some of our gear (such as this desktop computer). On the way to fetch the dogs, I told the Angels they needed to quickly provide today’s coin.  (It is now Day #319 of this consecutive streak). There were no cars at the drive through for one of the fast food diners, so I parked Pippy and ran through there.  Got my penny for today!  Thanks Angels.  The car wash was closed due to the fire, so I couldn’t resist just a quick look around there.  Found 20 Pennies, two Nickels, and two dimes.  (At least I think that’s what they are.  They are dirt-coated and need to be washed to verify that).  Wow!  That was quite a find.

***********
This email was ready to send out to you when the house phone rang.  It was our neighbors at our Crestline Cabin (50 miles from here) asking if we were prepared to evacuate?  I said I was just getting home and all is well.  He said, “NO!  I’m talking about the cabin!”  That is the Matterhorn Fire! I called my other neighbor there.  She said they were ready to leave at a moment’s notice.  Three houses on the block had already burned down, there were injuries, there area 7 engines on the street and dozens of firefighters working the area.  She asked if I needed her to use the house key and get anything of value out of there.

LOL - Earlier today Doc said if we needed to evacuate, we could always go stay at the cabin!

What are the odds that BOTH our houses would need to be evacuated due to fires on the same day?!  Life is full of surprises.

Email ThisBlogThis!Share to TwitterShare to FacebookShare to Pinterest
Labels: manifesting

Today I went to the post office to mail an envelope.  I had promised someone that the letter would be sent today.  I figured it would be just a 5 minute stop on my way home from running other errands.  Boy, was I mistaken!

I arrived at the post office to find the line going all the way out the door and there was only one person working at the counter!  A man leaving said, “It’s about a 30 minute wait from where you are”.  Grr… I had not planned for this much of a delay.  A promise is a promise, and the letter needed to be weighed, then mailed.

I stood in line just grumbling to myself.  “What a waste of my time!  I don’t like this. I had not counted on this.  It is foolish to do this – just put several stamps on the envelope and send it!”  My attitude was not very joyful at that point.

I started looking at the people in the long line. Many of them had several parcels they were juggling, plus it is the day before taxes are due, so no one in line looked very happy.

I noticed one young fellow several spots behind me.  He looked as if he only had one envelope in his hand. I asked, “Do you need merely a single postage stamp and you are going to wait in this long line for that?”  His reply, “Yes”.  I had my folder full of various stamps, so I said, “Would you like one with flowers?  Hearts?  Dogs? Trees or Other?”  He looked astonished and chose one.  He offered me the 2 quarters in his hand as payment.  I said, “Pay it Forward to someone else”.  He stamped the envelope, dropped it in the mail slot, then turned around to grin at the audience – the dozen people in line.  They, in turn smiled back!  A JOY MOMENT!

The line of customers continued to grow, but now I was less grumbly.  After a few minutes I noticed another person toward the end of the long line.  I asked the young man, “Do you merely need one postage stamp?”  He quietly said, “Yes, it’s for my taxes.  I don’t ever have a need for stamps to mail anything else.”  I handed him a basic stamp and said, “Well, then Merry Christmas!”  He laughed and the audience laughed with him.  He joyfully left the post office.

There was another young lad toward the end of the line.  Same question, “You also?”  He nodded.  I joyfully flitted back to him and presented him with a postage stamp saying “and a Merry Christmas to you as well!”  The other people in line were now laughing and grinning.

By that time it was my turn at the counter.  What a JOY to have had those moments. And I’ll bet some of those persons will tell at least one other person of their Joy Experience at the Post Office.

JOY is infectious – HELP SPREAD IT!

Yesterday I needed to pick up something from my Moms house.  As I drove through the mobile home park, I noticed that a number of the houses had Easter decorations in their front yards.  My thoughts were, “The decorations are cute and appealing, maybe I should create some sort of Easter décor in the yard of the Penny Palace.  That might be a nice thing for my neighbors”.  Then my “logical side” kicked in with, “That is crazy!  You have enough other things to do. You do not need to spend time or money on putting together an Easter yard display”.  With that internal argument resolved, I thought nothing more of the idea.  I had not uttered a word of this to anyone. 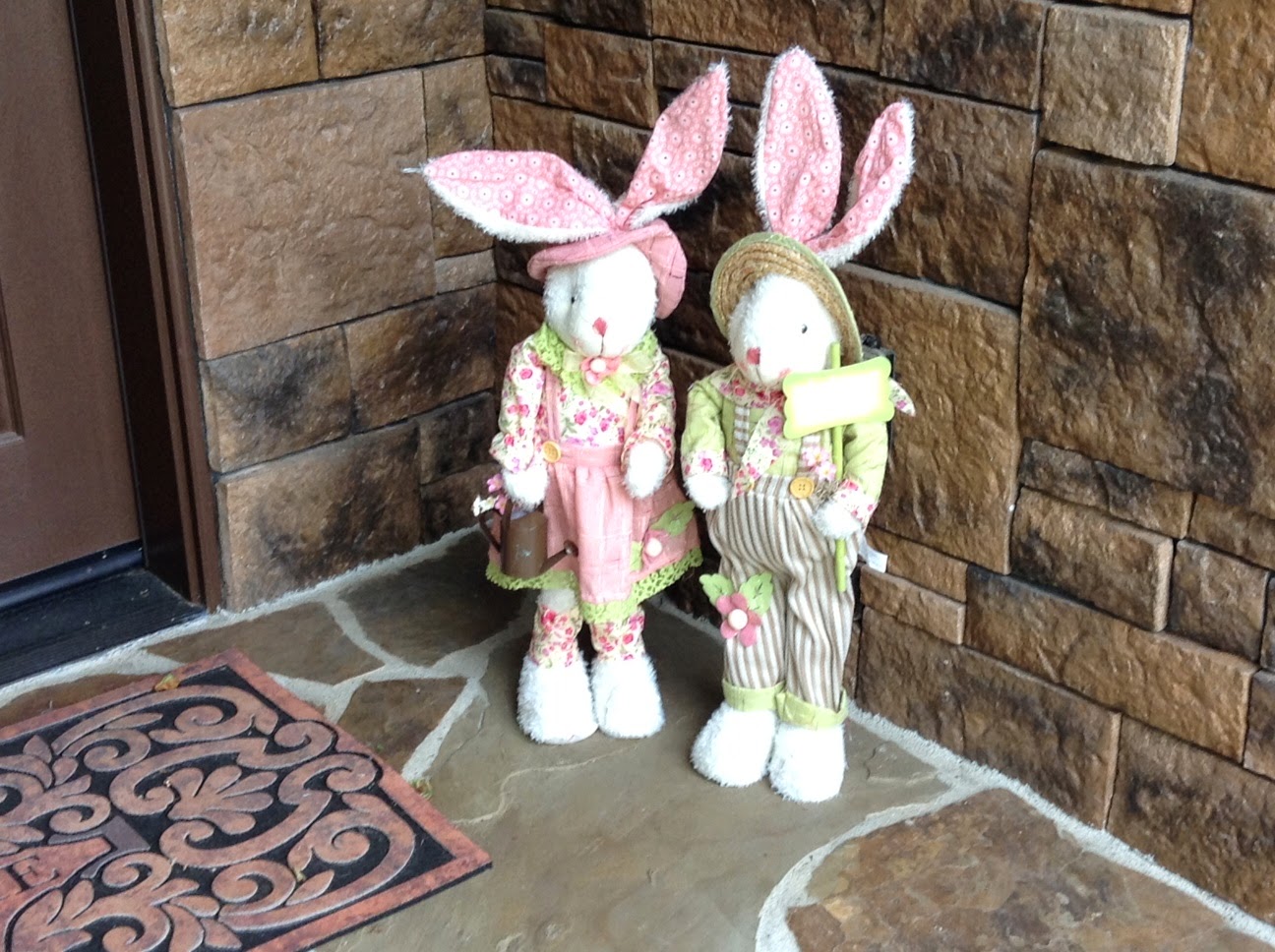 Look what I found on my doorstep this morning!!!!!
Two Spring Bunnies!
Talk about Manifesting!!  I was sure surprised.

Lesson:  The Universe really does deliver … so be aware of what you are thinking.
Posted by PennyFinders at 11:55 PM 1 comment: