There has been a large void at The Penny Palace after the passing of Sparky two years ago, and then Norman last year.  Even though Dundee tries his best to fill that void, we still miss the other two so very much. (Photo 1)

Today we met some new little critters who may soon be part of the family. 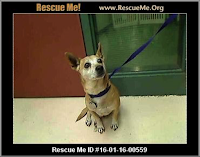 Earlier this year, I was surfing the web and landed on www.RescueMe.org.   EEKS!  Hundred of animals seeking their Forever Family.    A few of the faces caught my eye and I forwarded those mugshots to Doc.  Doc kept muttering, “Don’t Look, Don’t Look!”  Over next few weeks I kept returning to view the doggies.  One that attracted me was Mojo (Photo 2) because he looked so much like Norman.   I was not sure I was ready to adopt yet.  By the time I mustered up the courage to check on Mojo, he had been adopted.  Good for him.

Then I saw the Photo of ID #15-12-27-00166.  (Photo 3)  She looked cute and appeared to have some mischief in her personality. She is being fostered by Kathryn at Angels for Animals Rescue.  Doc said if I adopted this little soul, he would also need one – preferably a sweet, gentle loving Chihuahua (versus a canine with Attitude like Norman!)  So Kathryn (who Fosters animals rescued from high kill shelters) was proposing we adopt both Leia and Luke.  (Photo 4) Leia and I have now been emailing several times a day for the past week, so I was already in love with her and her playful attitude.

***********
Today Doc and I met Leia, Luke, Dolly and a few other fur babies.  We decided not to take Luke because he was smaller than we wanted, he is male (so Dundee might not like an additional male in our house), plus Luke has been with Kathryn for 6 weeks and has not yet learned to use her doggie door.  That was not a good sign.

We put the two potential doggies on leashes for a test walk in the parking lot.  I think Doc was in love before we even exited the store.  He was smitten as soon as he held his little girl.  (Photo 5)

We took the doggies out to meet Dundee and see how he would react to the girls.  He was OK with them.  Dundee and his Harem?   LOL.

Doc and I made the decision to adopt both doggies and Doc tried to get a good photo of me with them.  It was a hair-raising experience!  (Photo 6)  (The winds were gusting around 60 mph).

We went back into the store so that I could complete the adoption paperwork.  (Doc insisted that I sign for the dogs so that in the future he can say “They are YOURS, so YOU clean up the dog poop!”)

***********
Normal procedure is for the rescue organization to do a home inspection and to make sure the adoption is a “good fit” for everyone.  Evidently Doc and I passed our Interview with the doggies.   Leia was determined NOT to be contained any longer and wanted to leave with us. The handlers were asking if we could please take her home then and there!  It appeared that Leia was not going to be cooperative throughout the rest of the adoption event.  (That sure sounds as though she has some of Norman’s determined attitude)!

I believe it is essential that Doc and I block a few days on our calendars to adapt these little souls to their new home. Since we have commitments every day this week, we were unable to take them home today.  Hopefully by Friday we will be able to snuggle with our new kids here at the Penny Palace.

Posted by PennyFinders at 11:55 PM

Two wonderful stories about our furry friends today. I am happy for you and Doc (even though legally they are yours and you clean up the mess) but I think I'm even happier for the new "children" as they are moving into a beautiful home with a truly loving family.
The other story? Jeepers has been missing since last night, and after calling for him all day today, I returned at 4pm to find him on my front doorstep. After hugging him until he couldn't stand it anymore, I put him down where I expected him to run to his food dish. But he couldn't. He couldn't even limp. There is something really sore and swollen going on between his toes. I'm keeping him as comfortable as I can tonight, and have made an appointment for the vet tomorrow. I named Jeepers Creepers after my Jeep. He really is just as tough.